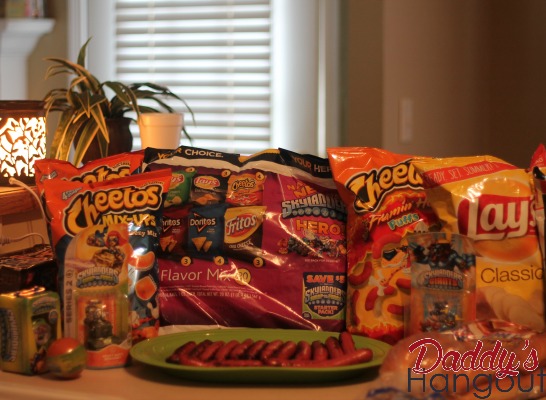 Finally school is out, all my kids, nieces and nephews all advanced to the next grade and so that means it’s time to celebrate. For the last 6 or 7 years I’ve always rewarded all of them for their hard work throughout the year by throwing them a little party by cooking out and letting them spend a couple of nights with me. So yeah, that’s a total of 7 kids running around the house, making noise and just being kids. My plans were to keep them outside playing all day until the sun was almost down and hopefully they would tire themselves out when they finally came into the house and they would go to bed early. Well those plans changed as it rained on our parade and of course I never checked the weather forecast. The day started really nice and as it crept towards 3:30 I decided I’ll start the grill up but when I went outside it was getting dark. After checking my weather app it seems that a storm was headed our way but I was still going to chance it and I managed to make the hot dogs before the rain hit. Well Plan B was that I ordered pizza but the kids seemed to not care because they were already tired from playing basketball most of the day and just wanted to play the Skylanders game on Xbox 360. You may have noticed in your local grocery store that when you buy specially marked Frito-Lay Classic Mix or the Flavor Mix 20-count variety packs they have a $10-off coupon for the Skylanders SWAP Force™ Starter Packs. If you’re a huge fan of the Skylanders like me and my kids are then you have the chance to help choose who will be on the cover of the new game due out in North America on Oct. 5th called Skylanders Trap Team™. Below are the 3 finalists’ names and their fan-submitted inspirations for you to vote on: All you need to do is head over to http://www.fritolay.com/skylanders to vote and you have until June 13th to do so and the finalist with the most votes will receive a $100,000 scholarship. Anyone that’s 13 years and older can vote and you also still have time to enter the giveaway to win a gift basket from Frito-Lay and Skylanders worth $50 by going here. TODAY IS THE FINAL DAY OF VOTING!!!!!! You can also have a great party like ours and hopefully it doesn’t rain on your party like it did ours. 4 Things I Miss About Having Little Babies Around

12 Amazing Reasons Why Dogs Are Good to Help Raise Children